State island between Europe and Africa

Under sail, Malta and its smaller neighboring islands of Gozo and Comino can be visited all year round.
This small southern European island state is well known for the impressive 300-meter-high calcareous cliffs, sheltered coves and the purest Mediterranean water. The seaside town of Valletta, the capital of the island, impresses with its medieval charm, numerous museums, palaces and magnificent churches. One of the baroque monuments of the city is the cathedral of St. John. Malta is also called a "fortified island" due to the large number of ancient fortifications.

A paradise for lovers of culture, snorkeling, divers and sun lovers! 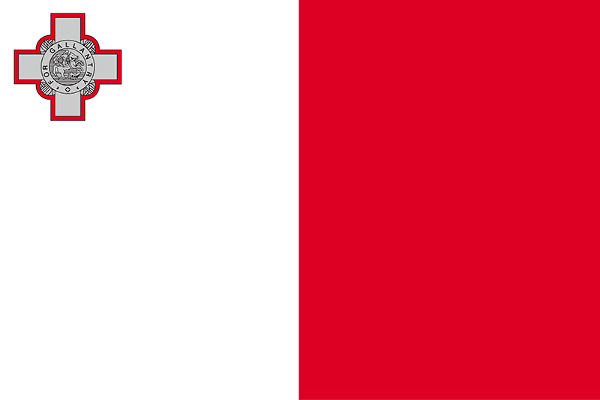 Over 6000 years of settlement, many power struggles on this strategically important island and the influence of many nations and cultures have left their marks on Malta.
In addition to the fantastic sailing conditions, the miniature EU Member State also offers many historical treasures with three World Heritage sites.

In the footsteps of crusaders and regatta professionals

Who wants to discover the sailing area around these rocky islands, enjoys the perfect combination of holidays on a boat and on the beach, cultural attractions and a mixture of Italian and English cuisine.

In recent centuries, there have been many fights for Malta due to its strategic location in the middle of the Mediterranean Sea. Those who won were able to control the maritime traffic in the eastern Mediterranean Sea and were valid as the guardian of the European land off the coast of Africa.

The Phoenicians, who named the island "Malet", left their mark here, followed by Greeks, Romans, Vandals and Ostrogoths. In the Middle Ages, Spain and Aragon shared power over the island and donated it as fiefs to the crusaders of the Knights of Saint John, who were able to fend an awful attack in a battle against the Ottomans in the sixteenth century. Since the victory over the attackers from the east, members of the order are called Maltese. After a few months of siege, in just five years, the invincible fortress "La Valletta" was built, which today is still the name of the old town and it is also recognized as a World Heritage by UNESCO.

The unique Maltese cuisine was created mainly from English, Italian, Arabic and African influences. In many restaurants on the island, you can eat good and cheap food. From the English the Maltese people have taken over the love for pubs and rustic small restaurants.

Every year in October the prestigious Rolex Middle Sea Race takes place starting from Malta, which is an about 600 miles long route. During this race the Italian island of Sicily with its sometimes smoking Stromboli and the small islands of Pantelleria and Lampedusa are circumnavigated in a counter-clockwise direction. The finishing straight is located in front of the Grand Harbor in Valletta, where many local people support each participant and - characteristic for this country - also firecrackers can be heard the whole day long, showing an exuberant atmosphere to the seafarers.

Each stop around the island of Malta and the neighboring island of Gozo shows a new perspective of the diversity of cultures that have left their marks on these rocky islands.

Bright and almost closed houses, built of limestone with large, shady courtyards dominate the former capital of Mdina. The coastal roads are colorful and full of life. Here, life pulsates - after an obligatory siesta in the summer months. Anyone who wants to experience party life in Malta should visit St. Julians Bay with its numerous bars and clubs. DJs from different cultures play here and students from all over the world come to Malta to learn English and party at night. A few years ago, the luxury Portomaso marina was built right next to the Hilton and an elegant apartment complex.

Those who prefer to calm down at a private place can immerse the anchor in the Bay of St. Paul or in Mellieha, the largest bay of Malta. Worth seeing is the fishing port of Marsaxlokk on the south-eastern edge of the island. Standing at the anchor, you can see the colorful Luzzu - traditional Maltese fishing boats. Every day a market takes place at the seafront.
Who plans to go to the small island of Comino between Malta and Gozo, can anchor in the Blue Lagoon or San Nikola Bay. You can admire the turquoise, pleasantly warm water. The island of Gozo is much calmer than the main island. The small harbor town of Xlendi is particularly charming, through which only a long indentation, similar to a fjord, reaches the lake. On the west coast it is worth stopping at Dwejra Bay. 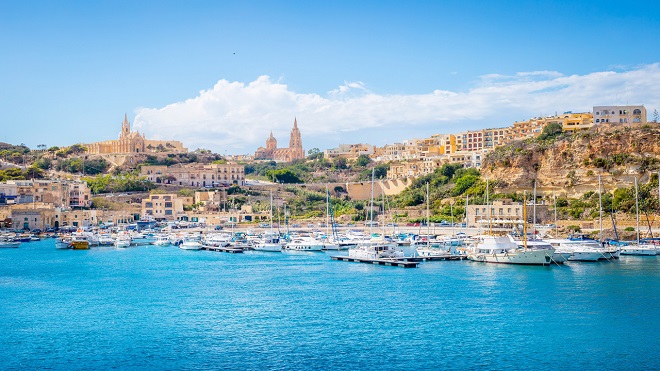 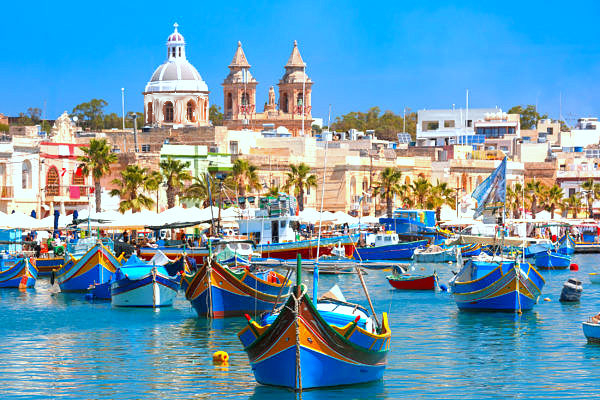 Charter base at Grand Harbor in Valletta

All islands belonging to the Maltese archipelago are rocky and unwooded. A characteristic feature of the main island is the 260-meter high limestone mountain range, a beige stone that was often used as a building material on the island. The southern and south-western part of the island has a steep, rocky coast that offers many romantic anchorages for sailors, the north and north-east of the island is much flatter. Here you find gently curved bays with beautiful sandy beaches. The main base of most charter companies is located in the Grand Harbor Marina in Valletta, an impressive harbor. If you have passed the narrow entrance to the port, where also large merchant ships and ferries enter, you can feel pretty safe (from time to time you can find a swell in this harbor). The largest marina on the island, Msida Marina (MMA Yacht Center), is located just a few miles north of Marsamxett.

Climate, wind and weather in Malta

Malta and its neighboring islands are at the same latitude as the Strait of Gibraltar and the Tunisian region Monastir. The climate of these islands are subtropical. Especially during the hot summer months there is a lack of water, because rain is very rare. Both in the summer and winter months, the dominant wind direction is northwest. Sometimes the wind blows from the north or northeast. Sirocco, which blows from Africa, especially in spring and autumn, does not cause any coolness but is a hot, unpleasant wind. Winters are very mild, temperatures rarely fall below 10 degrees during the night. In the winter months, the terrifying Gregale blows from the northeast and may cause a storm with gusts of wind, strongly affects the east coast of this small islands.

Air and water temperatures at a glance (eg Valletta):